If we had to pick our favorite tiki bar we’ve ever been to, Jeff “Beachbum” Berry’s Latitude 29 would without question be at the top of our list. Named one of Esquire Magazine’s best bars in America, this French Quarter spot is a must for any visit to New Orleans.

Most tiki-themed bars serve overly-sweet, low quality cocktails. Not so at this New Orleans establishment owned by famed tiki scholar Beachbum Berry and his wife Annene Kaye. The couple is so protective of their proprietary recipes that employees are required to sign non-disclosure agreements and we had to get special permission to photograph the cocktails. Our server, who was very well versed in tiki culture, gave us a brief explanation of the fascinating history of tiki. Rooted in escapism, Polynesian themed bars became popular in the early 1900s. The concept took on a life of its own. As our server explained, many of the words you’ll see on tiki menus are completely made up. Notable tiki mixologists would have little black books where they would keep their recipes, and often would make use of secret ingredients that were omitted from the recipes in case the notebook was lost. 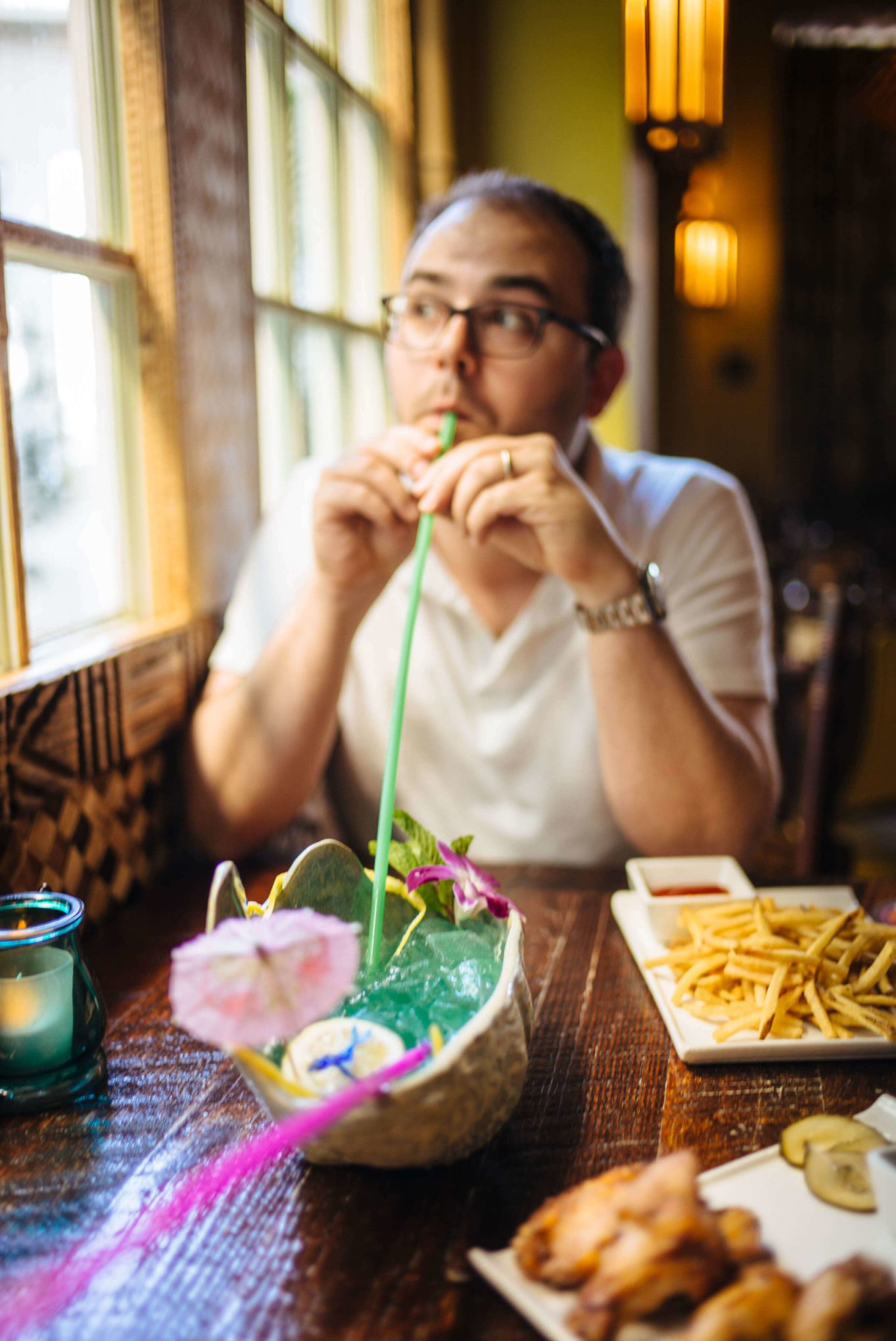 In order to provide the most informative and thorough recommendations possible, we sampled more cocktails than we would recommend ordering. Clayton’s favorite was the Aquadesiac, a stunning blue cocktail for two served in a seashell shaped bowl. Sarah’s favorite was the Banshee, a delicious banana-based blended cocktail served in a ceramic coconut from Cocktail Kingdom (you can get one to bring home). The frozen coconut head resembling an Easter Island statute was an especially intriguing garnish. Our third favorite was the Mai Tai, which sounds simple but is executed perfectly at Latitude 29, based off of the original Trader Vics 1944 classic with aged Martinique and Jamaican rums, Curacao, lime, and a whisper of almond. On our server’s recommendation, we also tried the Rum Barrel, described as “a pirate’s dream.” This dangerous cocktail appears more innocent than it is. Made with multiple rums, juices, herbs, and spices, the forest of mint growing out of the glass and playful monkey might mislead you into thinking this is some kind of kid’s drink. Be warned: it is not.

Beachbum Berry is the author of numerous books on tiki cocktails. We can’t wait to order some and start experimenting. Check out Sippin’ Safari: In Search of the Great “Lost” Tropical Drink Recipes… and the People Behind Them, Beach Bum Berry’s Grog Log, Beach Bum Berry’s Taboo Table, and Beach Bum Berry’s Remixed: A Gallery of Tiki Drinks.

The Publican Takeover at The Progress

Great article
I’ve never been to New Orleans. Now I know the first place I’ll be going to.

Top 5 Restaurants to Visit in...