Become a Premium Member      |       Get the Magazine
Half Moon BayRestaurantsTravel

We both love seafood, so on our recent stay at The Ritz-Carlton Half Moon Bay (see more here), a stop at the original Sam’s Chowder House was a must. We pulled in on a busy Friday night, and the place was packed (tip: park along the street out front and make a reservation). We were fortunate enough to get a table on the patio overlooking the harbor, and had a great time watching bands of fog roll in and out down the coast, and the sunset over the Pacific. We ordered cocktails (ginger punch similar to a Moscow Mule for him, Mai Tai for her) and a starter. Our server informed us that they had a special Peruvian-style ceviche of salmon, so that was a must. 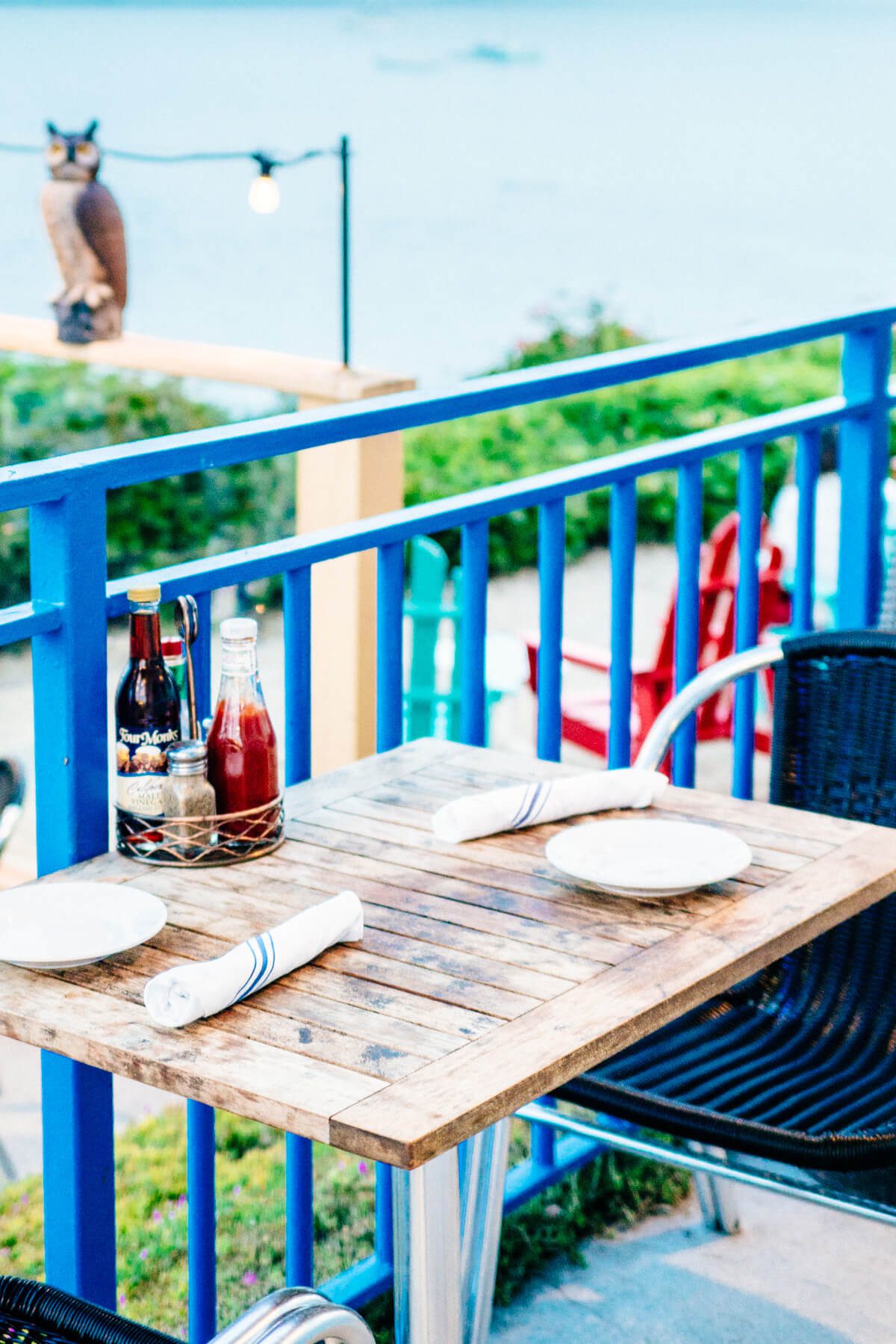 This being a chowder house, there was no way we were leaving without trying the New England Clam Chowder. Sarah’s family is from Boston and she has extremely high standards when it comes to clam chowder. This chowder was seriously delicious and did not disappoint! We had a chance to speak with the owner of Sam’s, Julie Shenkman, who explained that their goal is to create an authentic New England style chowder that doesn’t have a ton of flour in it. This is not chowder so thick that a spoon will stand up in it. It’s rich and creamy, but not so much that it overpowers the clams. We will be back for this, preferably on a cold foggy day! 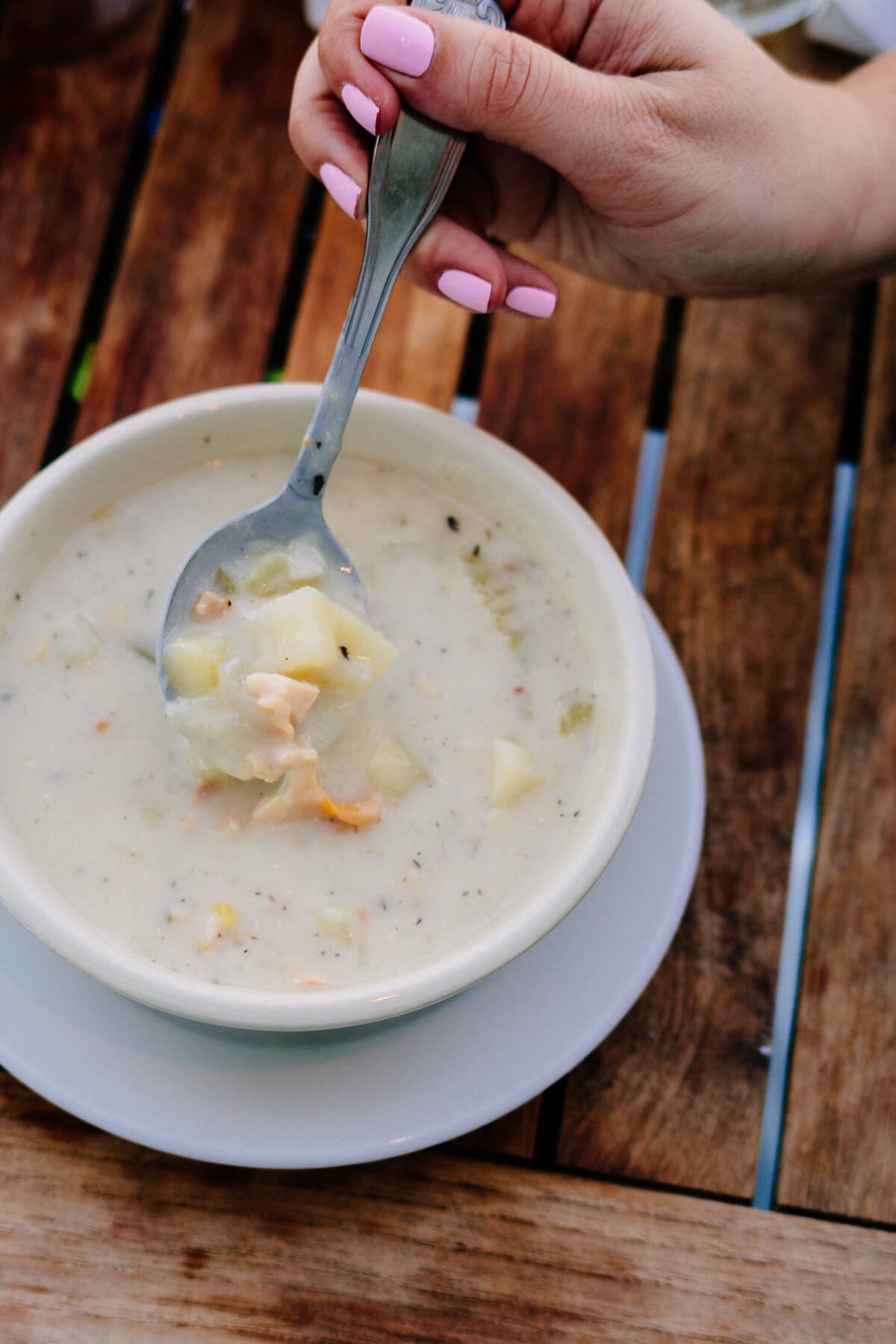 The lobster rolls are equally great, and also got Sarah’s New-Englander stamp of approval. They aren’t smothered in mayonnaise and don’t have unnecessary ingredients. These are all about the lobster and the bun. We found out that the buns are custom made for Sam’s at Moonside Bakery in Half Moon Bay, and they are delicious. They are like brioche, light as air, shaped into a lobster roll and toasted in butter. We were pleasantly surprised that it was so full of lobster meat it was falling out of the bun. We tried a small order of the Seafood Paella per a recommendation and loved it. One thing we loved about this dish was that it’s all about the shellfish. There is no sausage or chicken, just a bunch of delicious scallops, prawns, mussels, clams, and calamari. Finally, we were told their fish entrees were awesome, so we tried the salmon served on a delicious greens and mushrooms. The chef carefully pairs produce with each fish entree depending on what complements the dish. Nobody wants overcooked fish (we’d rather eat it raw!), and this came out perfect. Crispy on the outside and just a touch rare in the center. Even though we were stuffed from our seafood marathon, we made room for this and finished the whole thing. It was so good, Sarah was still talking about it a week later as we contemplated what to make for dinner. Obviously neither of us needed dessert, but Sarah grew up in Florida and can’t turn down a Key Lime Pie. We asked for a tiny slice just to try. It was the perfect way to finish off dinner. If you can’t make it to Half Moon Bay, Sam’s has a second location in downtown Palo Alto. In San Francisco, check out their Chowdermobile at the Off the Grid’s Presidio Picnic.

Thank you to Sam’s Chowder House for sponsoring this post.