Become a Premium Member      |       Get the Magazine
CuisineFish + SeafoodItalianPastaSummer Recipes 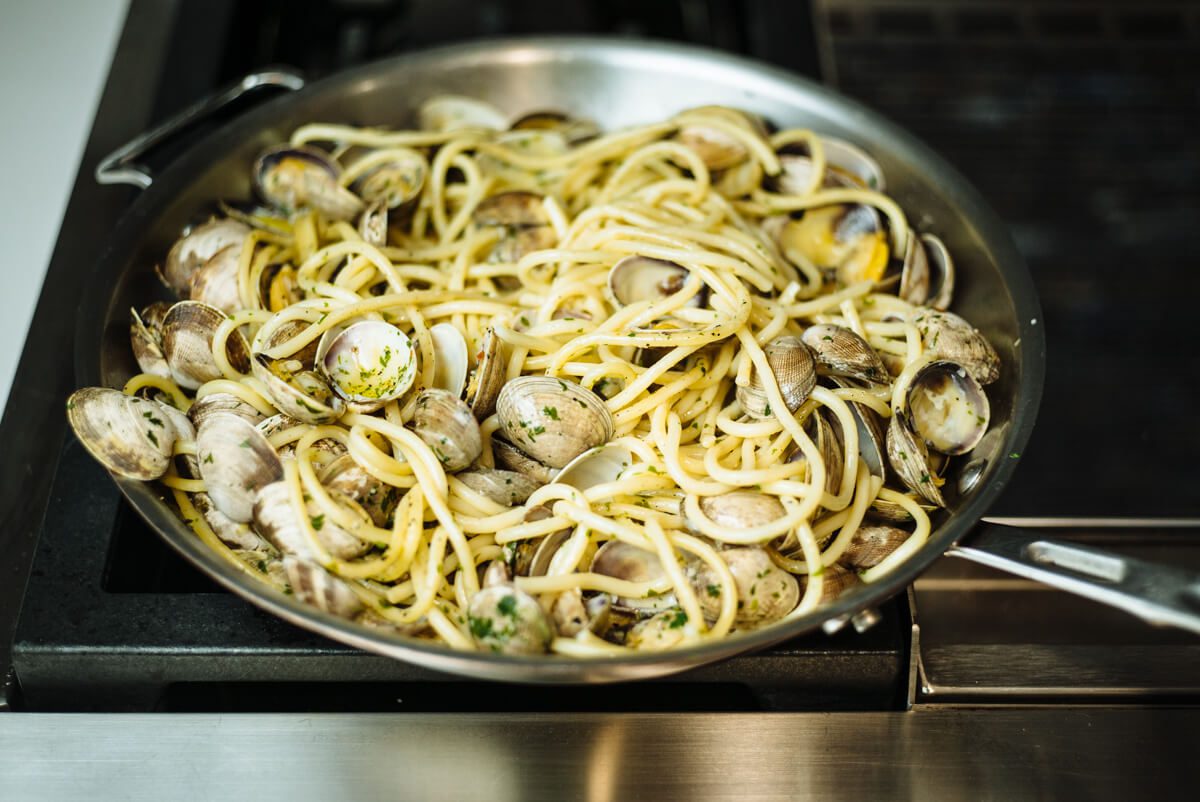 We’ve mentioned one of our favorite cookbooks, Polpo: A Venetian Cookbook of Sorts in several posts. It is a beautiful book and has lots of simple and flavorful recipes inspired by Venice. One recipe we keep going back to is Russell Norman’s version of pasta with clams or in Italy, spaghetti alle vongole.

We could make this dish every week. We like to use smaller clams, like Manila, because we like the size and flavor best, and they don’t need a lot of cleaning. Just give them a nice soak in some water with a few tablespoons of flour stirred in. This helps remove any grit or sand. We usually put a strainer in a larger bowl filled with water and let the clams hang out in the strainer a few hours. You can agitate them in the strainer and then lift them out of the water, leaving behind any grit and debris. Give them a quick rinse and you’re good to go. One thing we really appreciate about this recipe is the emphasis on timing, which is described in detail, so that if you follow the directions exactly, you’ll have a perfectly cooked bowl of pasta in about 7 minutes. I if you heat the water while you do the minor prep tasks, like mincing garlic and chopping some parsley, you could realistically have dinner on the table in 15 minutes! We would pair this dish with chilled Robert Sinskey Vineyard’s Orgia orange wine or a crisp white like Marisa Cuomo Ravello Bianco. Make sure you use the largest skillet you have for this recipe, that way the clams won’t be crowded and will open at roughly the same time. We use this size. We served ours in these pasta bowls that we just discovered and love.

We can’t recommend this book or this recipe enough. In addition to a really simple weeknight dinner, we think this would be a really fun pasta for entertaining. It doesn’t require hours of work in the kitchen before your guests arrive. A huge steaming bowl of pasta with clams in the center of the table, some crusty bread to soak up the sauce, a bottle or two of good white wine, and a few good friends sounds like a recipe for the perfect dinner party!